The History of the Christmas Stocking 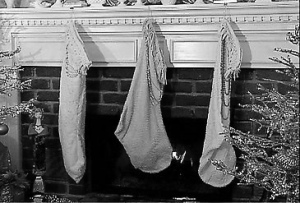 The tradition of hanging Christmas stockings on the fireplace mantle has been around for ages. When the tradition began, children would hang their socks or even place their shoes on the mantel, while today there are customized larger stockings that are specially designed to be used by children during Christmas. And, not only have the Christmas stockings changed, the gifts and sweets  that are put inside the stockings have changed through time as well. Children nowadays opt for modern kind of toys as the best stocking stuffers for Christmas, such as gadgets or branded toys.

Although there many different cultural takes on this tradition around the globe, there are two stories that are believed to be the source of the tradition: the story of a poor old man and his three daughters, and the Norse legend of Odin.

An Old Man and His Three Daughters

One story of the first stories about the Christmas stocking centers around a poor old man and his three daughters. Since his family had lost all of its money, the old man feared for the future of his three daughters because he had no money to give for their dowries. As the story goes, Saint Nicholas heard about the old man and decided to help him secretly. When the family was fast asleep, Saint Nicholas went inside their home and placed one bag of gold in each of the washed stockings his  three daughters had hung above the fireplace to dry. The next morning, the family was ecstatic to find the gold and the daughters of the old man were finally able to get married.

It is said that this story inspired other children to hang their stocking near the fireplace mantle, hoping that Saint Nicholas would visit them and place gifts in their stockings. Ins some cultures, oranges were placed inside the stockings as a symbol of the bags of gold that St. Nicholas gave to the daughters of the old man.

The Norse Legend of Odin

Another story that commonly comes up when researching the history of the Christmas stocking is the Norse legend of Norse god Odin and his flying horse. Children would put carrots, straw and even sugar in their boots as food for Sleipnir, Odin’s flying horse, and as a way to repay the gratitude, Odin would replace the stocking stuffers of children with treats such as candies.

In Holland, people still follow the tradition and fill their shoes with hay or a carrots as food for the horse. In Hungary, they practice the same tradition, except that they put their shoes beside the door or the window sill.

Stocking Stuffers Throughout the Years

In the past, parents would just put very small gifts, such as candies or fruits as stocking stuffers for their children or grandchildren on Christmas morning. Nowadays, the pressure is on parents to include the season’s hottest branded merchandise and toys so their kids can take playtime to another level.

Christmas stockings are an integral part of the Christmas holiday  — an iconic symbol of the joy and wonder the season brings to children throughout the world.  That is why our 8 ft. and 6 ft. Christmas stockings filled with toys are the ultimate expression of your commitment to Christmas, and the perfect for gift for the special boys and girls in your life during Christmas.